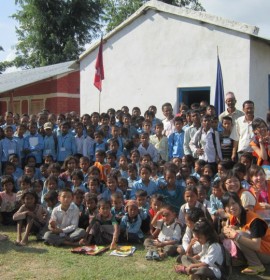 Backward Society Education (BASE) envisions the creation of a society free of exploitation.We work for the welfare of all marginalized communities, particularly those living in the mid west and far west regions of Nepal. BASE is an NGO and grassroots social movement with over 200,000 members. The movement rose from conscious young activists, whom seeing the negative effects of the Kamaiya system bonded child labour on their communities, decided to start a social movement to fight for its eradication. The Kamaiya system was abolished in 2000. In an effort to redress the negative effects of the Kamaiya system. notably poverty, illiteracy as well as political and social discrimination. We have formal and non-formal education programs to improve literacy rate. In the conflict management field, BASE has programs to ensure the protection of the rights of freed-kamaiya, child rights as well as processes to monitor human rights violations. Additionally, BASE has programs that provides livelihood support, education programs on water sanitation, environmental sustainability, disaster preparedness and response, infrastructure support and,the protection and promotion of traditional and indigenous cultures.

Our History
The origins of Backward Society Education (BASE) are to be found in a pioneering group of young activists who established the Charpate Club in January 1985. It was during their traditional Tharu New Year meeting in the village of Dumrigaon in Dang that the thirty four young people, including our founder Dill Bahadur Chaudhary, gathered together to discuss the problem of kamaiya bonded labor. After raising 700 rupees through cultural shows, the Charpate Club went on to become BASE in 1990, and to lead the fight against the exploitative kamaiya system which was finally abolished on 17 July 2000. After this monumental event BASE continued to work for the education and rehabilitation of the freed-kamaiyas, as well as people from other marginalized communities. BASE has received international recognition for its work, and Dilli Chaudhary has won many awards including the 1994 Reebok Human Rights Award and the 2002 Anti Slavery Award.

The NGO
BASE continues in its commitment to fight against illiteracy, poverty and social and political discrimination amongst all marginalized communities. Our aim is to transform the outlook of downtrodden people as well as their oppressors. We currently operate in eight districts in the mid and far western regions of Nepal, those being Dang, Banke, Bardiya, Kailali, Kanchanpur, Salyan, Surkhet and Rukum. However, we are now considering expanding our projects into other districts. Our main areas of work include formal and non-formal education, ensuring and sustaining rights for freed-kamaiyas, livelihood support, child labor elimination, support for sustainable democracy, human rights violation monitoring, conflict mitigation, water and sanitation, environmental sustainability, disaster preparedness and response, infrastructure support, the protection and promotion of traditional and indigenous cultures, and support for children associated with armed groups. BASE hires its staff primarily from the local communities of indigenous and marginalized people it serves, and in doing so it works to strengthen indigenous capabilities.

The Social Movement
BASE is not just an NGO but one of the largest social movements in South Asia. We have a membership of over 200,000 people, of which about 29,000 are actively engaged in voluntary community work. BASE’s membership is organized through a network of district committees, area committees, village committees, women’s groups and youth groups, all operating at their own respective level and in their own areas. These grassroots committee members are democratically elected every five years, and they provide the strategies and ideas to keep BASE in touch with the current needs of our communities. The committees also play a crucial role in monitoring and evaluation, troubleshooting, coordinating with national and international agencies, and communication and exposure of BASE in the diplomatic sphere. The power of BASE’s membership is even further enhanced by hundreds of child clubs, women’s groups, income generation groups and other community organizations.

Vision
BASE dreams of creating a society free from exploitation.

Mission
BASE is committed to creating an equitable and progressive society replete with social, economic, humanitarian and institutional development for the preservation of the cultural and the environment.

Goal
To promote accessibility for socially disadvantaged communities to create opportunities and improve their living standards for the creation of an equitable and progressive society.


Warning: A non-numeric value encountered in /srv/users/serverpilot/apps/tulsipuronline/public/wp-content/themes/directoryengine/template/comment-place.php on line 15
0 COMMENT

YOU MUST LOGIN TO SUBMIT A REVIEW